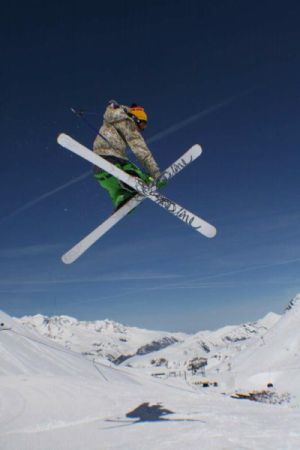 On the east coast, winter is a season proceeded by a distinct fall—a season in which the hillsides become illuminated with reds, yellows and oranges from the changing foliage. Growing up in the Colorado Rockies, Aspen trees turn golden every fall, but not much else really changes color once autumn rolls around. However, as soon as the summer season wraps up and whitewater rafting guides pack up for the year, you’ll start hear the murmurings in local coffee shops and restaurants about the upcoming ski season. By the time that first dusting of snow coats the evergreens, everyone is already giddy with anticipation for those first turns of the season—and what skis they’ll be making them with.

Every year, all the major ski companies release a ton of new skis and new models. As a loyal K2 costumer (I currently ride the K2 Missdemanors), I was excited by all the new hot models of their skis out this season. Here is a run-down on the new K2 skis for the season.

>>Now that you have that brand new pair of skis, you’ll want to find a way to protect them when you hit the road with your sticks. Check out the best ski bags for traveling.

I am a big fan of almost an ski K2 has out on the market, and this ski ideal for tele-skiers is no exception. With grunge inspired graphics look sweet and the early-rise tip prevents taking a tele-tip dive into powder or crud. The flat tail also makes this ski ideal for tele skiers. There is a mini rocker, which allow for platful smear turns and the ability to ski a longer length ski. A great ski for those experienced skiers who tele.

My brother started talking about these skis last winter before they were even officially announced to the public. As a big mountain skier who really knows his gear, you know a ski’s hot when my bro is talking about it a year out. The Hell Bent is a twin-tipped, switch-pow-landing fatty ski. It returns from its inaugural season (2008/2009) with different graphicsm but the same construction. It’s the ski that has it all—ABS sidewalls, huge rocker and fir core. You’ll find this ski at mountains that see a lot of the deep powder. It’s also recommended you mount these 5 mm forward of what’s suggested for all-mountain performace to curb the wheelie effect.

If you are looking for an ideal touring ski, the 2009/2010 Coomba’s square tail and fir-cored lightness make it a great choice. Named after designer Doug Coombs wanted to create a ski that was great for touring, but could also be skied all over the mountain.

I own a pair of twin-tipped female specific K2’s and love, love them. This female-specific twin tip put on a few lbs. this year—getting a little fatter and making it a great ski for those big mountain riding chicks to tear up any terrain with. The ski features a progressive sidecut for maneuverability, vertical ABS diewall and a BioFlex core.

Park rats and resort skiers will be thrilled with the new Kung Fuja, which is a 95 mm-waited ski that great for the park and resort skiing. If you plan on hucking jumps off cliffs, catching some air and sticking to the marked slopes, this is the ski for you.

If you were a fan of the longtime running Public Enemies by K2, you’ll probably like these new Extremes which replace the PEs. Bringing back the old school K2 neon graphics, this ski is a twin-tip designed for all-mountain versatility. It’s got torsional stiffness, fir core, ABS sidewalla. Everyone and anyone can enjoy ripping groomers or finding fresh powder fields in this ski.

Calling all powder loving, storm chasing skiers out there. With a 102 mm waist, this ski is a total diva in that deep powder. A braided core keeps the ski light and agile and a progressive sidecut means you can still hit the groomers with this deep stuff centric ski.

Much like its name would lead you to believe, these fatty skis are great for those who like to spend most of their time cutting fresh turns in deep powder and skiing off piste. It features a fir/aspen core, has a rocker, and tapered tail.

Designed by pro skier Seth Morrison (and obviously named after him), this ski returns this season with more rocker and 7 mm of girth underfoot. For those looking for a ski that performs well off piste and has less rocker than the Hell Bent and Pontoon, than this ski is for you.

For those big mountain, hard riding chicas out there, I salute you, and also highly recommend this ski. The K2 MissDemeanors are essentially the female-specific version of K2 popular and long running Public Enemies. If you are a powder loving lady who like to bomb groomers, hit the bumps, huck a few jumps in the park and ski trees, these are a great all-mountain twin-tipped ski. I should know, I own a pair myself.