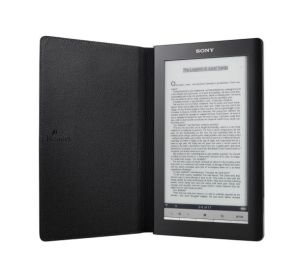 It’s been a sad few years for the folks in the print media business. With the rise of the ever pervasive internet, newspapers are folding around the country and magazines are struggling to stay afloat. It seems as if everything is moving to the online and digital medium–including books. While Amazon has long sold a digital e-reader, the Kindle, and even released a newer, bigger and better model earlier this year (the Kindle DX), it now seems other companies are following suit and riding the digital media wave.

Sony announced this week the release of their new Reader Daily Edition, its very first e-book reader with built-in wireless capability. The Reader Daily Edition offers an integrated 3G wireless connection, which allows owners of the e-reader to access Sony’s online bookstore as well as subscribe to yet-to-be announced newspaper and magazine subscriptions.

The Sony Reader Daily Edition boasts a 7-inch touch screen (which you can have displayed in wither portrait or landscape mode) and has wireless service provided by AT&T with no direct charge to the customer.

For library lovers (like me) who may be worried that the coming of the digital e-book will mean the death of borrowed books, Sony launched their new reader at the New York Public Library and announced its support for library loans to Sony Reader. This means that libraries that participate in electronic lending, will allow you to download borrowed books and transfer them to the Reader for 21 days (after which the files expire).

While Sony is working on partnering with many companies for where you can buy e-books and material for the Reader, it most notably will not be syncing with Amazon, which has it’s own e-reader, the Kindle.

With wider file compatibility and a wealth of free content not available on the Kindle, Sony is certainly not ceding the market to Amazon’s Kindle. In fact, the Sony Readers will be able to access hundreds of thousands of public domain Google Books as well as the free library loaners. Plus, the Sony e-reader features a touch screen, which the Kindle has yet to offer.

>>The Sony Daily Edition will be available in December, right in time for the holiday gift giving season. But, if you just can’t wait until then, you can buy Sony’s other e-book reader.