This thing is huge!  Purported as the “largest portable hammock on Planet Earth,” the Hammock Bliss Triple measures over 8 feet wide and almost 10 feet long.  This enormous hammock is great for couples that want to snuggle but still have their own space.  With a ridiculously large surface area, you can seriously lay out in any position with plenty of room to spare.

Constructed from a high strength parachute material, the Bliss Triple is strength tested to 350 pounds.  Testing out the hammock last weekend in Utah’s American Fork Canyon, we had a tough time luring a third person into the Triple since I had put it up right on the edge of the cliff.  We thought about tossing in the dog but decided that since we are going to be giving away this stellar hammock on Facebook soon I should keep it in top condition. 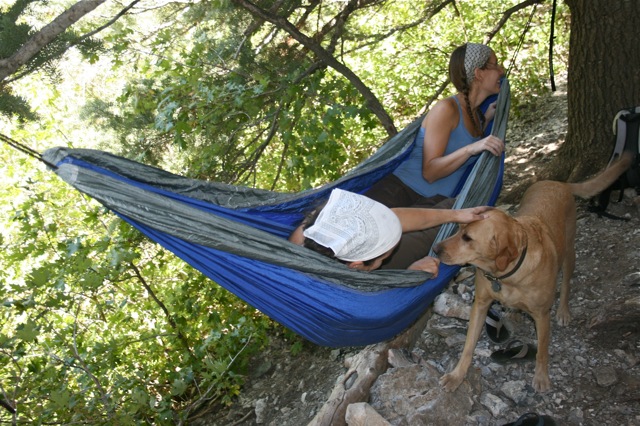 The hammock is pretty light and compact at only 26 ounces and fits into a permanently attached travel bag that doubles as a gear pouch.  Unlike some other backpacking hammocks I’ve tried out, I could actually get the Bliss Triple back into its travel pouch.

Another sweet thing about the Hammock Bliss is that it comes with its own rope for easy set up.  The super strong 6 mm climbing rope is already threaded through the hammock so you just need to find a tree to wrap each end around and tie using the handy knot tying instructions included.  I recommend also picking up the Hammock Bliss Tree Straps, they make hanging the hammock a bit easier and they are friendlier to the tree.

All in all, the Hammock Bliss Triple is crazy sweet.  It was pretty easy to set up and although it took up twice the space in my pack as a single sized hammock, it was more than ten times the fun.  It was a great conversation piece at the crag and many people were drawn to its immensity.  If I were single, I would take this hammock on all my outdoor adventures for its man magnet powers.  My only complaint though, is that there aren’t any built in beer koozies. 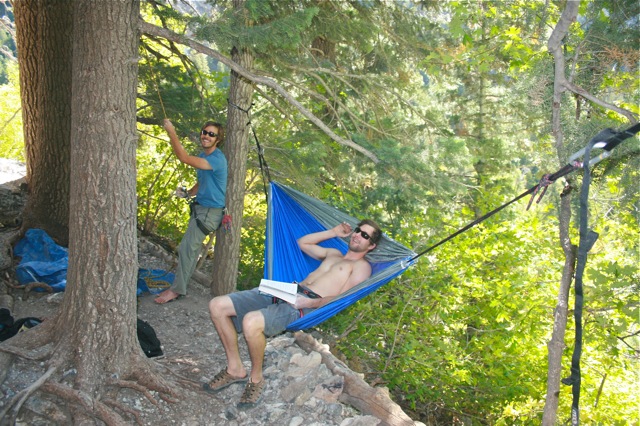 Like the Bliss Triple? See reviews of other Hammock Bliss Products: