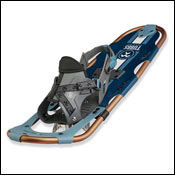 While the Tubbs Mountain series snowshoe will suit the guys just fine out in the backcountry on long treks through variable conditions and steep terrain, the ladies out there need their own snowshoe for conquering the tough stuff.

Designed with a woman’s lower center of gravity and shorter stride, the Tubbs Ridgeline snowshoes are the female version of their Mountain male counterpart. The snowshoes are constructed with the same 7000 series aluminum frames, which are 20% lighter and 57% stronger than industry-standard 6000 Series Aluminum.

The snowshoes also feature stainless steel crampons with long, sharp teeth under the balls of your feet give you optimal traction as you ascend and descend snow and traverse ice. To provide additional traction and stability, the snowshoes also have a rotating toe cord that ensures the snowshoe frame drops when you lift your foot, allowing the snow to slough off and your crampons to grip.

Outside Online Magazine writes about the Tubbs Ridgeline Snowshoes:

They’re a big 30-inch-long snowshoe for big loads, and they have features such as extra-tough 7000-series aluminum frames, long, sharp crampons, and a beefy binding that’s easy to use when wearing gloves and that offers lots of support when sidehilling or climbing steeply. Wear these puppies when ferrying a big load on a weekend or week-long winter trip.

The Quick & Dirty:
Where you can get them:
Tubbs Women’s Wilderness Snowshoes

While these snowshoes seem to have all the bells and whistles for the makings of a great backcountry snowshoe on paper, they may not measure up quite as well out in the outdoors. Trailspace editor, who originally loved the snowshoes, said that the “balls of the feet hurt with cinching the straps, my feet became numb with hikes longer than 2 miles” and that the “snowshoe completely fell apart (the whole back part shattered) in 10 degree weather on flat ground.”

Looking to buy? Here’s where you can get ‘em:
Tubbs Women’s Wilderness Snowshoes