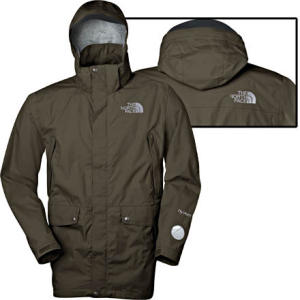 Rainy season in the Pacific Northwest is almost upon us (incase you haven’t heard, we don’t see the sun for about 8 months) and this year should be particularly wet with El Nino on the way so I’ve geared up, with a fittingly named jacket from The North Face – the El Nino. Mine is the Root Green color incase any of you want to copy me.

Long Winded Version:
At first, I thought I had made a mistake on the size. When I put it on at home to try it out, it seemed like it was too big, but it’s actually supposed to be a bit. The shoulder fit is good, along with the torso but it does hang a little low. This is probably because it’s supposed to keep you from getting wet as much as it can. The longer-than-normal sleeves are nice and offer velcro to fasten them up above your wrists if you’re into that sort of thing. I like the fit now that I’ve gotten used to it since it allows me to layer under it easily with fleeces or the like.

The lack of inside pockets bugs me a bit, because that’s usually where I put my wallet to keep it extra safe (and all those Benjamins dry) and I’ve resorted to carrying it in one of the outside flap pockets which leak just a bit with horizontal water coming at you – aka hurricane or garden hose.

There’s a couple nice features on the pockets that counter-balance my only complaint. The upper chest pocket (outside access) on the left – there is one on each side – has a headphone hole where you can route your wires to your iPod. The pocket is big enough for about 3 iPod videos so you have plenty of room for other stuff too. Also in the front there are 2 zipper pockets in front of the flap pockets so there’s plenty of space to stow all sorts of stuff.

The hood is not detachable – although it has buttons on the sides, it’s sown on at the back. But knowing North Face, those buttons probably attach to some fancy neck gaitor or something. I couldn’t figure out how to roll up the hood and keep it that way either. However, the hood does allow for good adjustment with drawstrings.

The jacket’s light weight is a big plus too in my book, and durability seems strong at this point.