The next Laptop ban? 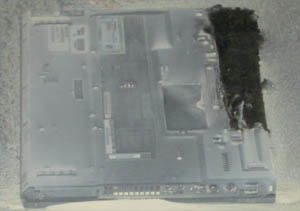 This time, the culprit is an IBM Thinkpad. Causing quite a havoc at LAX when it caught fire, and giving people a terrorist scare. Watch United to ban Apple, Dell and IBM computers soon…

Reported by William Shatner on the somethingawful.com forums.

With all these issues, what’s the TSA going to do? Ban them from the airports now?