In a recent survey conducted by the European Commission (EC), it has been found that less than twenty per cent of European based consumers think that the current prices charged by mobile broadband providers to customers who travel within the EU are fair, and this follows recent changes to the way that providers charge for mobile broadband data roaming. 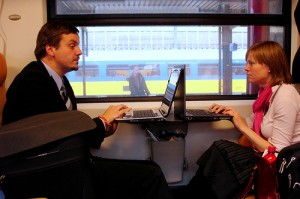 In fact, it seems that some seventy five per cent of consumers are worried about the costs that can be incurred for both voice and data use when traveling within the EU.

We only have to go back a short while to see why there is so much concern over the charges that can build up in a very short time. Take the case of student William Harrison, he ran up a bill of £7,648.77 in around a month, using an Orange mobile broadband dongle on his laptop. He was working in France for six months and needed broadband, after visiting the Orange shop he was advised that mobile broadband was the way to go.

According to William Harrison, “The woman in the store said the dongle would work perfectly in France, especially for a short-term contract,” says William. “She said there was a 3 GB (giga byte) limit on data use but that this would be ‘perfectly ample’.” However, after only a few weeks of using Skype and other online services, the bill had got completely out of control, as his usage passed the 3 GB data limit on the account the charges increased.

According to a statement by an Orange spokesperson, “We have a number of initiatives in place to help customers control their costs and we hope that these, as well as the customer’s own individual responsibility, will ensure customers can manage their roaming costs appropriately. All our roaming charges are available on our website, and literature which advises that these are separate to the inclusive UK data allowance accompanies the dongle at the point of purchase.”

This is just one example of how what at first appears to be the best mobile broadband for traveling around Europe, can very quickly lead to a huge monthly bill and it is just one reason why around seventy two per cent of mobile users limit their usage while traveling outside of the UK.

The EC’s digital agenda commissioner Neelie Kroes, recently addressed a meeting of mobile broadband providers at the Mobile World Congress 2011 in Barcelona, she said, “Today voice roaming prices within Europe are still more than three times the level of domestic charges. Average charges for roaming offers other than the Euro-tariff are even higher. And for data roaming the position is even grimmer. The consumer often pays less than five cents for downloading a megabyte of data at home, but this may turn into €2.60 per megabyte when the same consumer crosses an invisible border.”

The good news is that the EC will be reviewing the charges applied for mobile broadband data roaming, the idea is to create a single market, where the prices are same within the EU. However, the review is a work in progress and does not have to be published until the 30th June 2011.

Until a level market has been created, mobile broadband users can place a maximum limit on their accounts, this way they make calls and surf the internet knowing that they will not be going home to a large mobile phone bill.