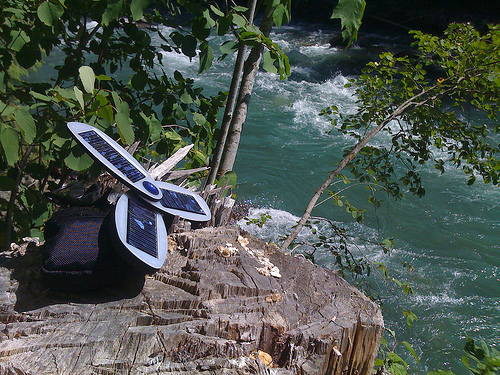 When is the last time your cell phone or GPS ran out of battery miles from an electrical outlet? If you had only had a portable solar charger you could have turned the sun’s rays into power for your portable electronics.

Portable solar battery chargers have been out for awhile now, but they are far from perfect. They offer a great solution for charging portable electronic devices in the backcountry, but they do take about twice as long as a regular outlet to fully charge a device. Solar chargers are great for emergencies or when you’re far away from an outlet like at the beach, on a safari, or high on a mountaintop.

The Solio Classic Solar Charger is probably the most popular portable solar charger on the market. The super sleek charger unfolds into a fan blade type shape to reveal three solar panels ready to collect the sun’s rays to charge your cell phone, digital camera, GPS unit, or mp3 player. As far as charging time goes, Solio estimates the Classic will take around 9 hours to fully charge in the sun compared to 4.7 hours from a power outlet. 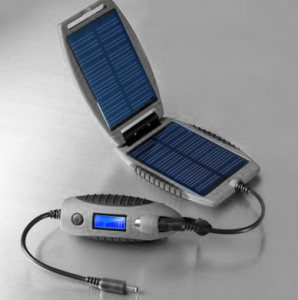 The Power Traveler Powermonkey is a solar powered charger for mobile phones, iPods, and PDAs. It looks just like a little flip mobile phone and it flips open to reveal two mini solar panels that capture enough of the sun’s energy to power cell phones, iPods, and PDAs. Best thing about the Powermonkey is that is is built tough with a water-resistant and durable casing making it a good option for adventure travelers. The Powermonkey is also great for world travelers since it comes with a universal mains charger with interchangeable heads so you can plug the charger into outlets in over 150 countries.

The Brunton Restore Portable Solar Charger is the largest of the three, but it is also the most reasonably priced of the three. Still the Restore isn’t that much bigger than an old school iPod and the charging unit flips open to reveal two solar panels that can charge your iPod cell phone, or other portable electronic devices. A water-resistant and durable shell keeps the unit well protected so it is also a good option for adventure travelers.

Have you tested out a portable solar charger? What did you think?