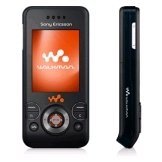 Who knew there would come a day when a cell phone would be designed especially for runners and athletic types? That is exactly what the Sony Ericsson W580i is. This little guy is a super sleek slider phone that is part cell phone, part mp3 player, and part fitness application. I know what you are probably thinking, how can a cell phone be designed for runners?

The answer to that question might be more simple than you think. Aside for the Sony Ericsson W580i’s size and functional design, it has a built in fitness application that is extremely powerful. The built in application has the ability to count steps, gauge your speed, and even monitor calories burned.

If you are an active runner looking for a great all in one cell phone/mp3 player/fitness application; then the Sony Ericsson W580i is undoubtedly what you are after. Make no mistake that the features listed above are not just a gimmick. This phone has been tested and listed as a Gear of the Year by Outside Magazine in 2008.

Amazon.com: $399
Looking to buy? Check out these sites: