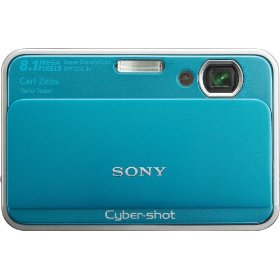 A while back I did some shopping for a point and shoot digital camera. I wanted something that was small enough to carry comfortably in my pocket. I also wanted it to be fast so that I could capture all those sweet candid photos and classic Kodak moments. Unfortunately for me, I didn’t know about the Sony Cyber-shot DSC-T2 because it meets all of the above requirements and then some.

As far as size goes, the Sony Cyber-shot DSC-T2 is as little as they come. One thing that help keep the Sony Cyber-shot DSC-T2 small is its lack of a telescoping lens. This camera sports a non-protruding 3x zoom. The other really cool feature that helps keep the camera sleek is its lack of buttons. The back of the camera is a 2.7in wide touch screen.

Style and size aside, my favorite features of the Sony Cyber-shot DSC-T2 are its speed and built in memory. This camera is fast. Fast enough to catch all kinds of spur of the moment shots. With a fast auto focus system and no noticeable shuttle lag, you are sure to get some amazing shots.

Looking to Buy? Check out these sites:
Amazon.com: $242