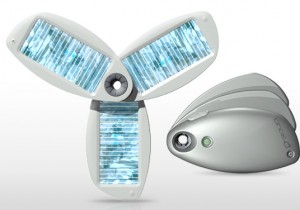 Solio claims that the Solio Classic charges over 3200 devices including cell phones, digital cameras, GPS units, and mp3 player. The Solio Classic includes adapters for popular cell phone brands as well as a USB and mini USB. As far as charging time goes, Solio estimates that it will take around 9 hours to fully charge the device in the sun compared to 4.7 hours from a power outlet.

What is super cool about this device is that it stores energy for up to 1 year to you can charge up your electronics whenever you need to. Once the lithium battery is charged, you simply plug in your electronic device and press a button to begin charging. A status-indicator shows the power level of the battery at all times.

The Solio Classic is probably the most popular portable solar charger on the market. Although I haven’t tested it out myself, other reviewers say that it performs reliably and charges efficiently. It is important to note that solar chargers are great for emergencies and occasional use when camping or in the backcountry. You won’t be happy with a solar charger if you expect it to keep all your electronics fully charged when traveling – I don’t think solar chargers will ever be as fast as plugging into an outlet.