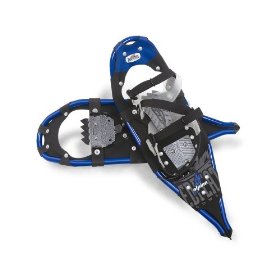 If you are looking to invest in a slightly more advanced pair of snowshoes that will allow you to head deeper into the backcountry or be used on multi-day trips through the snow, you’ll want to invest in a pair of backcountry snowshoes like the Redfeather Alpine series.

While the Alpine series by Redfeather does have many great attributes that make it a good pair of snowshoes for heading deep into the backcountry, there are a few drawbacks to this particular model.

According to a review on BackpackingLight.com, the Redfeather Alpine’s were a little on the heavy side. Tester Marty Coatney found that while “the stainless steel crampons of the Alpine 30 performed amazingly well, the rest of the package was lacking.”

One of the lacking components? The heavier weight of the snowshoes, which according to the manufacturer comes in at weighing 4.8 pounds, made these some of the heavier backcountry snowshoes out on the market.

According to Coatney, “while loaded with features, the added weight was very noticeable during use.” That being said, the Redfeather Alpine series still had a lot going for them.

This includes an easy-to-use binding system that allows the user to wear almost any kind of footwear. The binding is tightened with two nylon straps that cross the foot in three places: one independently adjustable strap across the toes and one strap that crosses over both the arch and the top of the foot. The flexible plastic heel strap uses a ratcheting system that is extremely easy to use, even with cold hands or while wearing over-mitts.

The snowshoes crampon system also worked amazingly well, even in the unpredictable conditions near my home base of Portland, OR. According to Marty Coatney:

Another reviewer and I tested them to their limits on a section of the Timberline Trail on Oregon’s Mt. Hood. We traversed into Zigzag Canyon, a 1200-foot-deep gorge on the shoulder of the mountain. There were places where a loss of traction would mean an unplanned glissade, followed by a free-fall to the bottom. Cool, rainy days followed by cold nights during the trip meant the snow had an icy crust in some places and was slushy wet in others. These were conditions where we needed boot crampons and an ice axe, not snowshoes and trekking poles. The Alpine 30 crampons handled the situation with no problem. After learning to trust the crampons, they were the only part of the snowshoe that I didn’t have to constantly think about.

>>Learn more about how to pick snowshoes and find other models

The Quick & Dirty:
Where you can get them:
Redfeather Alpine 30 Snowshoe with Ultra Binding

While these snowshoes certainly have a few major drawbacks—namely the heavy weight and the tendency for them to dive in the snow—they also have enough positive features that make up for these faults. A trustworthy crampon system that gives traction even in tough conditions make the user not have to think or worry about their snowshoes even when in potentially hazardous spots, and stability and safety are obviously huge bonuses for any backcountry gear.

Looking to buy? Here’s where you can get ‘em:
Redfeather Alpine 30 Snowshoe with Ultra Binding