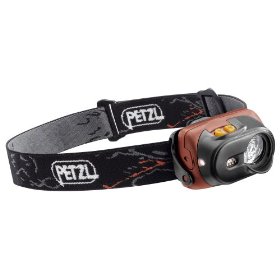 While the Petzl Tikka XP LED Headlamp might look like a majority of the other headlamps on the market, it is far from average. In fact, it couldn’t be further from average, as it is one of the most featured filled headlamps out there. Combine all the features, its compact size, and its low price tag; it is easy to see why it is so popular. So popular in fact that the Petzl Tikka XP LED Headlamp was an editors choice for Backpacking Magazines Gear of the Year issue.

One thing you may notice right away is that the Petzl Tikka XP LED Headlamp is super bright. I am not just talking kinda bright, but blinding bright. That bright light is powered by three tripple A batteries. I’m not sure of the battery life on the bright setting, but at the low setting it can shell out around 120 hours of light.

It amazes me that companies like Petzl, who have so much awesome stuff, can constantly improve it and make it better. The Petzl Tikka XP LED Headlamp is prime example of that. They took their basic headlamp and made it even better. The only thing I would like to see is maybe some sort of rechargeable battery pack. In the mean time, I think rechargeable batteries will work just fine.

Looking to Buy? Check out these sites:
Amazon.com: $55