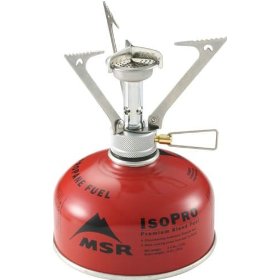 Probably one of the most impressive features of modern backpacking stoves is their sheer size. Overall, backpacking stoves continue to get smaller, more compact, and light weight. While a smaller backpacking stove is nice for the obvious reasons of less weight and lass pack real estate; the smaller size is also nice for another reason. typically, these smaller stoves are a lot easier to clean and repair in the filed, which is always a plus.

Another nice innovation in the world of backpacking stoves are the all in one cooking systems. These types of backpacking stoves are great because not only do they include everything you need to make a backcountry meal, but they are often self contained. This means all of your cooking wear and stove are in a compact unit they work cohesively with one another, making the entire cooking and packing process near dummy proof.

Here are some backpacking stoves we have reviewed: