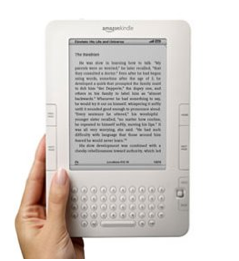 This is why I don’t buy anything when it first comes out anymore. I remember when I bought my first digital camera and was so proud. It sported a whopping 3 megapixels and took me over 6 months to pay off.

Well when the Amazon first released the Kindle in November 2007 it cost $399 US and now less than three years later it has dropped over half the cost and improved on numerous features.  Upon first release it sold out in only 5.5 hours and wasn’t available again until 5 months later and now it is readily available and delivered free to your house in only 2 days.

As of July 2010, the 6-inch screen Kindle has dropped in price to $189 making it the cheapest e-reader on the market.  Plus Amazon is currently running a 2-day free shipping deal on the device.

I still prefer to read books the old fashioned way but this price drop (and free shipping) has me rethinking that idea.