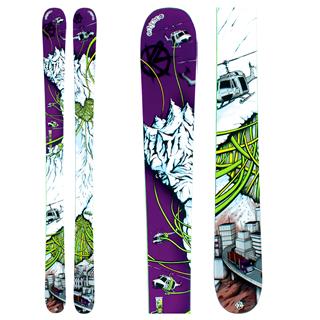 Perhaps I am partial to this ski and the brainchild behind them, professional skier Seth Morrison, because much like me, Seth grew up skiing the slopes of Summit County in the Colorado Rockies. In fact, Morrison raced for a rival ski team (though not at the same time I was racing) at Vail. Today, Seth Morrison is a Colorado based freeskier and is the oldest member of the K2 Factory team, in addition to being the inspiration behind this new K2 ski named in his honor.

The K2 obSETHed took a departure from the earlier designs inspired by Morrison and took K2 in a radically different direction when they designed this ski. Nearly 10 mm wider than Morrison’s last ski, the K2 obSETHeds are a big mountain twin tip with an easy-to-ride standard taper.

Morrison specifically looked to design a ski that would work with his freeskiing style, but still had remarkable versatility. The shorter rockered tip on the K2 obSETHed skis make them more versatile when skiing in crud and hardpack—making them better for more variable conditions than their more rockered brother ski the K2 HellBents.

The Quick & Dirty
Where you can get ‘em:
>>Buy K2 obSETHed Skis

• Vertical ABS Sidewalls: Precision and strength all in one, so you can go to hell and back again without ever worrying about your ski core.
• 3.5 mm edge: Thicker more durable steel edges prolong the life of your skis
• Tip and Tail Plates and rivets: Aesthetically pleasing, extremely functional, tip and tail reinforcements so your skis tips and tails are better prepared to take a beating.
• 15/20 Rocker Design: 15mm between the tip/tail and the traditional contact points and 20mm of rocker from those contact points. Ski deep pow, get big float and enjoy a loose bio-directional feel originally inspired by the surf industry.
• Single Ski Weight:169 (4.72lbs/2141g), 189 (5.62lbs/2549g)
• Ability Level Advanced – Expert
• Core Material Fir
• Dims: Tip 138
• Dims: Waist 105
• Dims: Tail 125
• Tail Type Partial Twin Tip

If you are are a big mountain skier who likes to spend your time skiing vertical faces in the backcountry, but also frequently find yourself in-bounds skiing tress, bombing groomers or even hucking tricks in the park, then the K2 obSETHeds are a great ski for you. Designed with a freeskiing mentality, but also with practicality and versatility in mind, these skis inspired by Colorado boy Seth Morrison are the perfect ski for all-mountain domination.

Looking to buy? Here’s where you can get ‘em:
>>Buy K2 obSETHed Skis