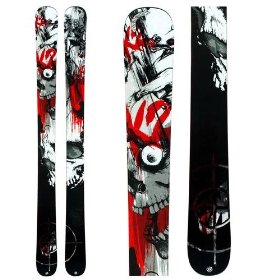 The new “it” item in the world of skiing and boarding is reverse camber design, which means the tips and tail of this particular ski to bow up to an unnatural bend. Imagine a really extreme twin tip in essence. The Hellbent is the fattest ski in the K2 twin tip line, with an impressive 150 mm tip, 122 mm underfoot and an elongated tail for switch landings. If you are a powder lover who likes to pull the occasional trick, than these are definitely the ski for you. The reverse camber design makes the ski float unbelievably well in deep powder. While other fat skis (and don’t think these aren’t fat—because they definitely are), float well also, the reverse camber design on these give them even more floatability.

The fat design paired with the minimal sidecuts also make this the perfect ski for chopped up powder and variable ski conditions (because you only get first tracks once). However, while these skis are designed for powder, they have also gotten great reviews for all kinds of terrain and snow conditions. The sidecuts makes them easy to carve and the rocker gives a ton of pop when going off kickers and rollers. While these skis were deisgned with backcountry powder, they also perform amazingly well in the park and on groomers (because you can’t always will a big powder dump—hard as we might try).

These skis definitely aren’t for everyone out on the mountain. Expensive, big and rather heavy, these skis are actually not designed to please the masses or give Sally a better ride down a groomer. That being said, if you are a serious skier and a powder lover, these skis are the best thing out there. Appropriately named, these skis are ideal for those hellbent on riding big mountains and deep powder. All the skiers I have personally known who have riddent this ski, and all of the reviews I have read, agree that the Hellbents are flat out fun. Period. The rocker design means you float over the snow better than anyone else, and the extreme twin tips making pulling that 360 off a kicker and landing switch a breeze (well, maybe a breeze isn’t the right word, but easier than in another ski). After years of riding Public Enemies, one day out on the Hellbents had me a reverse camber convert. If you’re a backcountry powder junkie, you’ll be quick to fall in love with the new Hellbents.