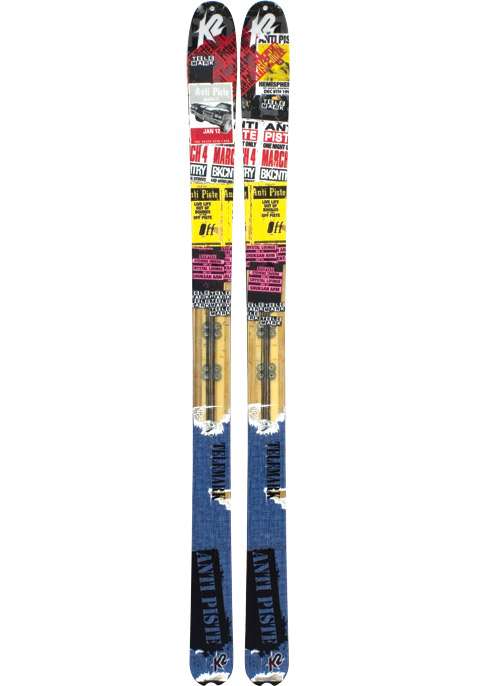 Long before fall arrives, skiers all over the world start to think about gearing up for next year’s season. Long before the first snow flakes fall, may have already scoured the internet learning about this year’s newest models of skis and debating which new model they’ll be setting their sites on for the upcoming ski season. For those K2 fans out there (I am one myself), this year’s Anti Piste is a new and imporved version of a good all-mountain and tele ski.

Similar to the K2’s other popular telemarking ski, the Coomba, the Anti Piste has a similar construction with a bit of rocker in the tip. And according to testers, that rocker makes all the difference. While the ski s make ripping turns a lot easier, this ski doesn’t do quite as well at carving on hardpack as the Coomba (which may make it a less than ideal ski for those who ski on icey snow pack most of the time). Even with it’s less than ideal carving performance, however, the Anti Piste was rated as a favorite for an all-conditions and all-mountain ski.

The pre-drilled inserts also make swapping in any tele binding at home a breeze. With grunge inspired graphics, this ski also looks sweet without sacrificing performance. The early-rise tip prevents taking a tele-tip dive into powder or crud. The flat tail also makes this ski ideal for tele skiers. There is a mini rocker, which allow for platful smear turns and the ability to ski a longer length ski. With a 98mm waist, this ski is designed for powder junkie telemarkers.
This fat tele ski is designed with the powder hound in mind (hello backcountry storm chasers) and the ski’s dependable damp wood core and fat footprint make it glide acorss the powder and has remarkable control for a ski this wide.

The Quick & Dirty:
Where you can get ‘em:
>>Buy K2 Anti Piste Telemark Skis

• Eliminate the vibration at critical nodes with Mod Technology that produces a ski that is smoother, more stable and has better edgehold
• Inserts take the time and guesswork out of mounting, double the pull-out strength of bindings and increase durability
• Long, less reactive tip and a wide waist for stability and predictability
• Optimized for 20% hard snow and 80% soft snow
• Progressive sidecut combines two different radii in the same sidecut, thereby improving both hard snow performance and soft snow versatility
• Providing stability that still manages to be forgiving, the Triaxial Braided core is a combination of three distinctly different
woods

While this fat tele ski will make turns on hardpacked groomers just fine, it is ideal for thos powder loving backcountry skiers who spend their winters chasing storms and finding the deepest stashes. These skis will perform fairly well all over the mountain, but they were designed with the deep pow in mind and thus perform the best off the groomers and in the backcountry powder stashes. That being said, this ski has remarkable versatitly and the sidecuts make cutting sharp turns a breeze. For backcountry hounds and tele skiers, this year’s model of the Anti Piste is sure not to disappoint.

Looking to Buy? Here’s where you can get ’em: