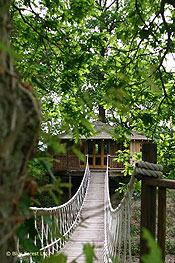 Ever since I was a kid and saw the original Star Wars movies, I dreamed about the Ewok villages high in the trees. To run carefree across a rope bride from house to house; to carry groceries to my home via a simple rope and pulley system,; to climb a ladder to the front door; what a life that would be.

Now, that life can be yours, and in sunny Costa Rica no less. I was looking around for places to escape to in Costa Rica and came across Finca Bellavista.

Finca Bellavista is a sustainable living community in the rain forests on the South Pacific coast. Lots, houses, trees, whatever it is you buy, starts at around $50,000. Not too bad for a tree house. Then again I don’t really have any comparables.

The community has been featured in a few major magazines including Outside. So, if you’re interested in escaping the tax man, these tree high, jungle bungalows are waiting for you. Just don’t show up dressed like an Ewok, I don’t think Star Wars is nearly as popular in Costa Rica, so they might just look at you funny.