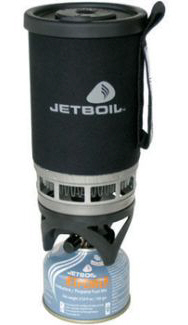 What backpacker hasn’t had problems getting a camping stove light or felt like it took FOREVER to cook something out in the wilderness? Anyone who has ventured into the backcountry knows a broken-down or ill-working stove can be a huge drag. However, problems cooking in the wilderness will be a thing of the past for backpackers with the Jetboil personal cooking stove. While your friend’s stove sputters out during cold, windy weather, you can chuckle and kindly offer him or her a hot cup of coffee or tea from still working Jetboil.

This amazingly compact and efficient backpacking stove can boil 2 cups of water in two minutes, all while using half as much fuel as conventional stoves. Plus, you can cook anything in the compact canister from soup to dehydrated meals and the canister doubles as a mug with a drink-through plastic lid and a measuring cup. The Jetboil personal stove does not stop to impress there. A line of accessories can also do things like turn your personal stove into a back-country french press (best cup of coffee I’ve had backpacking EVER). Another major bonus is that the entire stove (including the fuel canister and stand) can pack into the two-cup aluminum cooking cup.That means the entire stove is smaller than a Nalgene water bottle and weighs an astonishingly light 32 ounces ounces. While other camping stoves in the past have offered a few of these great features, never before has one stove nailed down all the best and most important necessities–it’s light, it works (really well), it’s small and it’s efficient. Jetboil combines the best features of its predecessors and has created a product well worth the copious amounts of hype it has received from every major backpacking and outdoor magazine and club.

This is the best camping stove out there. It’s reliable, it’s compact, it’s efficient. It’s everything you always wished your backcountry cooking system was, but wasn’t. Now you can have it all with this amazing little stove. Every serious backpacker/adventurer should have one. Plus, you can purchase a variety of accessories for your jet boil to make it that much better, including a coffee press. Fresh coffee in the wilderness? Talk about bringing civilization to uncivilized locations. An almost instantly hot cup of coffee on a morning in the wilderness remind you your Jetboil was worth every penny.