Into the Wild Movie

Into the Wild Movie – September 21 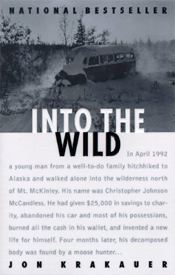 No decent vagabond can call themselves such without having read John Krakauers book, Into the Wild. If you find yourself one of the rare travelers who hasn’t read this book, you’re missing out. Into the Wild is a true story of young man with a thirst for life and a dream to experience it. This book is one of, if not my all time, top favorites. Now thanks to the marvels of modern technology (and Sean Penn), there is an Into the Wild movie.

The Into the Wild movie is directed by Sean Penn and comes out in theaters September 21st.

Check out the preview for the Into the Wild movie on the movies website, here.

IF you are one of the few who hasn’t read Into the Wild, here is a little teaser to wet your appetite…

“ In April 1992 a young man from a well-to-do family hitchhiked to Alaska and walked alone in the wilderness north of Mt. McKinley. His name was Christopher Johnson McCandless. He had given $25,00 in savings to charity, abandoned his car and most of his possessions, burned all the cash in his wallet, and invented a new life for himself. Four months later, his decomposed body was found by a moose hunter…”