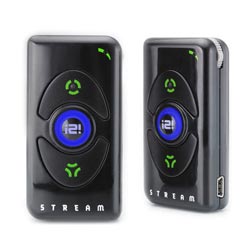 Back in the halcyon days of portable CDs and even walkmen, I used to own a little graphic equalizer that had one input and two outputs, which enabled me to share my music with my headphone-wearing friend sitting next to me on a plane. Thanks to the i2i Stream, I can now do that wirelessly from about 10 or 15 seats away, provided we don’t try it during takeoff or landing.

The idea is simple really. You plug an iPod (or whatever) into one of these devices, and then you can transmit your tunes to up to 4 other people, as long as they also have one of the little units. The packaging seems to suggest that this could make for a good silent dance party or something like that, but that might be a bit optimistic for the company. These things work really well at wirelessly sharing music, but partly due to the high-ish price, this might be best suited to couples who want a shared listening experience, or who only own one iPod.

How well does it work

Being the sort of person who only reads instructions as a last resort, it was frustrating that I actually had to dig them out for such a simple-sounding product. But the instructions themselves are short and easy to understand, so I was up and running quickly anyway. I tested a few different pairs of headphones on different kinds of music, and was extremely impressed that the audio quality was identical between the slave unit and the master unit.

I moved the slave unit almost 30 feet away (which it says is the limit) and I started experiencing a few minor dropouts, but aside from that the sound quality was excellent, even behind a closed door and a wall. Both units in the 2-pack can be either slaves or masters, so if both people have iPods they can switch back and forth on who is choosing the music.

What else it’s good for

It seems that the primary use of sharing music might not come up terribly often, so I was very pleased when I found another really good use for the 2-unit package. As someone without a car, I walk, bike, and take public transportation everywhere I go. My iPod Touch can often be really awkward tethered to the end of my headphones depending on what I’m wearing at the time. I found with the i2i Stream I was able to plug my iPod into one unit and put that in my backpack or pants pocket, and then connect the other unit to my headphones. The thing comes with all the cables you need, and it even comes with lanyards so it’s really easy and comfortable to wear around your neck. Now, my headphones are only connected to something dangling off my neck, which is actually much cooler than the situation before.

The thing does what it says it’s supposed to really well, and I even found another great use for it. They charge on any USB connection, so you don’t have to worry about batteries and such. The only complaint is the price seems a bit high for something like this right now. The company’s site is offering them for around $120 at the moment, but I found them for around $100 elsewhere. Hopefully the price comes down soon because these could really be great for certain people.