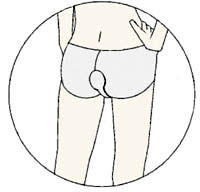 Did you eat a breakfast burrito with beans, or do you have a “medical condition” that causes abnormal amounts of flatulence?

This, my friend, is no laughing matter. Either way you have it, you could be the next person to bring down an airplane because of too much farting. The TSA’s sure to frown upon that.

Flat-d, the “Doctor Recommended for a better quality of life” pad that you shove in your undies which deodorizes your farts could have saved the day, according to their recent press release.

This is a much more clever option than just shoving one of those little trees in your drawers.

With the rules against brining cigarette lighters on board, or more than tiny amounts of liquids, I’m surprised that up to 4 books of paper matches are allowed by the TSA as long as you don’t light them. Expect that to change shortly. But they should at least stock the planes with some spray air-freshener.

I, for one, am adding this to my list of gifts to buy for some people I know if for nothing else than the gag factor.

PS: For all you women who blame the guys for letting it rip, I’d like to share this one little statistic from the Flat-D press release:
Irritable Bowel Syndrome, which can be a cause of uncontrollable flatulence affects 25-million people (in the USA) and of those 70% are females ranging from the age of 29 to 60 years old.