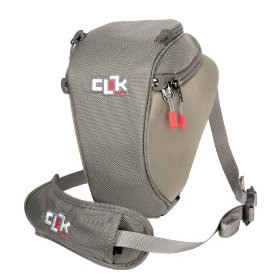 If you have ever tried to take pictures at a sporting event like football or basketball, you know how annoying it can be to carry a camera bag around. They are big, bulky, and can slow you down when getting from one end of the field to the other. Sure, you could get a waist pack camera bag, but those are almost as annoying. Lets say you aren’t a sports photographer, but instead maybe a hiker with a passion for wildlife photography, or a mountain biker who likes to quickly capture shots from the trail. Traditional camera bags, and even many non-traditional camera bags aren’t going to cut it.

So, whats a would be photographer to do? Well what do all of the above scenarios have in common? They are all activities where it would be convenient to have your camera bag at hands reach without having to stop what you are doing. Waist pack camera bags help do this a bit, but the Clik Elite SLR ChestPack does it much better. The Clik Elite SLR ChestPack is similar to the waist pack design, but allows you to keep your camera on your chest so that you can get to your camera within seconds. Because you wear the bag on your chest, you are able to wear it comfortably in a wider variety of activities such as mountain biking, bird watching, climbing, etc.

Looking to Buy? Check out these sites:
Amazon.com: $90