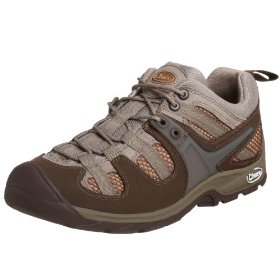 Chaco has long been known for its amazing sandals. Kayakers and rivers guides have been using them for years thanks to their outstanding quality. And when I say years, I don’t mean the brand, but in fact the same pair of sandals for years. If the quality of their shoes is anything like that of their sandals, then the Chaco Canyonland Low should be nothing short of impressive.

Unlike many other approach shoes, the Chaco Canyonland Low features an extremely low profile outer sole. This low profile makes rock scrambles and small foot holds much easier to deal with. And of course it goes without saying that the outer of the shoes is made up of micro fiber synthetics to help ensure that they dry as quickly as possible.

Seat-of-the-pants rating: 9 out of 10
I have had my same pair of Chaco sandals for about two years now. I pretty much wear them 365 days a year, but you would never know it. Looking at the sole of them, you would think they were brand new. Assuming the Chaco Canyonland Low holds up as well as the sandals, these should be a pretty amazing pair of shoes.

Looking to buy? Check out these sites:
Amazon.com: $99