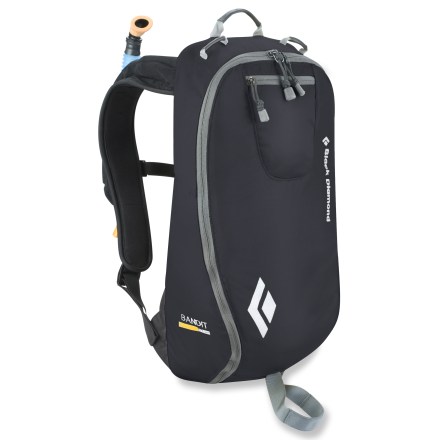 Any backcountry skier already knows about the virtues of the Avalung, a breathing device designed by Black Diamond that can help you breathe in and potentially survive getting buried in an avalanche. The Black Diamond Outlaw pack with Avalung has a breathing tube, which is deployed from a zippered pouch in the left shoulder strap. The idea is to keep this tube handy when skiing avalanche terrain and in your mouth if you are skiing especially dangerous terrain (i.e. a touchy slope you fear might go).

While there are debates on the effectiveness of the Avalung (you have to get the mouthpiece in your mouth and have it stay there for it to work), this new technology has saved some lives, including Dan Morisey of my home state of Colorado who was buried by an avalanche and whose Avalung probably saved his life (read this interview with Morsiey about the Avalung).

If you are looking for a super low profile pack that has this potentially lifesaving feature of the Avalung, then the Bandit is probably for you. The Bandit is Black Diamond’s super minimalist pack that’s quite a bit sleeker and smaller than the Black Diamond Outlaw. It’s 690 cubic inch profile means you barely notice it when riding on the lifts and makes it easy to forget about once you are cruising down the slopes.

However, the Bandit’s sleek look belies it’s utilitarian nature—it comes with sleeves for hydration bladders, a place to store your snow-safety tools like a shovel and beacon and this tiny little pack even has a cleaver stashed diagonal ski carry system built in. There is also a clamshell opening in the back panel that allows you to find all of your gear easily.

The greatest innovation in this bag, however, was the inclusion of an Avalaung in such a small, sleek pack. It’s an ideal pack for day-trips and jaunts into the sidecountry.

>>Check out more of the best ski and snowboard packs

The Quick & Dirty:
Where you can get one:
Buy Black Diamond Bandit AvaLung Pack $179.95

• Also well suited for heli/cat skiing adventures and quick tours from your alpine hut
• Integrated AvaLung apparatus can increase the time you have to breathe if trapped in an avalanche; air is pulled in directly from the snowpack via a mouthpiece
• Exhaled carbon dioxide is directed out the exhaust port at the bottom right of the pack, extending the time available before an ice layer builds up and seals out oxygen
• Breathing tube runs through the left shoulder strap and can be positioned such that the mouthpiece is readily available
• Shovel and probe organization pockets allow simple access to your essential equipment
• Insulated sleeve helps prevent your hydration reservoir (sold separately) from freezing up; drinking tube routes through insulated right shoulder strap
• Pack carries skis diagonally or a snowboard horizontally
• As with avalanche beacons, the Bandit AvaLung pack is not a substitute for wise assessment of hazardous avalanche terrain

This lightweight, low profile pack is ideal for skiers who like to hit the sidecountry and backcountry for day-trips. For someone like me, who gets REALLY annoyed by having a big pack on when riding the lifts, but likes to have a pack to strap my skis on to when hiking the sidecountry (not to mention somewhere to stash my hydration bladder and PB &J), the Bandit is the perfect size. It’s super sleek and lightweight, but still has all the features you need in a good backcountry day pack (including the Avalung that could potentiall save your life). The only gripes about this bag is that it’s not quite large enough to haul a larger-bladded avy shovel very easily and you have to kind of jury-rig it to carry a snowboard.

Looking to Buy? Here’s where you can get one:
Buy Black Diamond Bandit AvaLung Pack $179.95