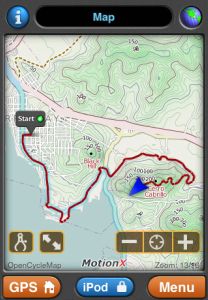 The iPhone is quickly becoming an indispensable travel tool, replacing the need to carry several gadgets every time you go on a trip. On the Travel Gear Blog we’re going to outline some of the ways you can turn your iPhone into the ideal piece of travel gear.

The iPhone’s built-in GPS capability makes it already pretty handy when it comes to figuring out where you are, but there are GPS apps that make your iPhone even more useful. These apps can be used for anything from hiking to sailing to geo-caching to driving (as long as you’re not simultaneously driving and checking your iPhone, that’s a no-no).

GPS Apps for the iPhone

MotionX GPS
$2.99
The MotionX GPS app is one of the best-selling GPS apps available, largely because it does so much – and it costs far less than a separate GPS unit. The app will track you anywhere in the world using topographic and road maps, including maps from Google and Bing, and you can store the maps right on your iPhone in order to use the app offline as well. The app also lets you save more than 300 waypoints and more than 100 tracks, and then share anything from either list via things like Facebook or Twitter.

Trails – GPS Tracker
$3.99
The Trails GPS app lets you record your tracks right onto your iPhone and export them when you’re done, but it has the added benefits of letting you import tracks as well. Say you find a cool track someone else did that you want to follow – it’s as easy as importing them into the Trails app, and you’re ready to go. The app stores maps right on your iPhone, too, so you can use them offline. And while you’re in the middle of a hike, for instance, you can edit your tracks right on the map – adding or deleting waypoints as you go.

EasyTrails GPS 4
$2.99
The EasyTrails GPS app uses Google Maps and Google Earth to track you when you’re running, biking, skiing, etc, giving you a visual record of where you’ve been on a real-life picture rather than a topographic map. The app records while the iPhone is in standby mode, which greatly increases battery life. And although this is true of most of the GPS apps listed here, we love that the EasyTrails developers actually put in their app’s description that you “don’t have to be athletically inclined to take advantage of this program,” since you can use it to figure out “which route to the office is the shortest.”

GPS Kit
$9.99
The GPS Kit app features tracking on street, topographical, or street maps (your choice), and includes many things found in other GPS apps listed here. One nice aspect of GPS Kit is that you can measure distances on a map easily with a touch of your finger. This app allows for saving an unlimited number of tracks and waypoints, and you can share both via Google Earth, Google Maps, or with any other iPhone users you know.