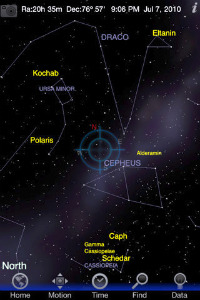 The iPhone is quickly becoming an indispensable travel tool, replacing the need to carry several gadgets every time you go on a trip. On the Travel Gear Blog we’re going to outline some of the ways you can turn your iPhone into the ideal piece of travel gear.

I don’t know about the rest of you, but when it comes to astronomy I’m kind of an idiot. Sure, I can routinely find the Big Dipper at home, and I did manage to locate the Southern Cross on my last night of a trip to Australia, but other than that I think the sky looks like a giant mess of white dots.

Carrying a guide to the stars would be smart, but how much easier is it if your astronomy guide also happens to be on the phone you’re carrying anyway? These iPhone astronomy apps are incredibly cool, and they’ll make any night spent star-gazing that much more interesting. Want a planetarium in your pocket? Any one of these apps will do nicely.

Astronomy Apps for the iPhone

Star Walk
$2.99
The Star Walk app uses augmented reality to let you point your iPhone at the night sky and the app’s compass will figure out where you are and what you’re looking at so that what you see on the iPhone’s screen is what’s in the sky above you. Then, as you move your phone, the image updates. If that wasn’t enough, with the touch of a button you can see a picture of what that same sky looked like at other points in time. Seeing a real-time update of the sky you’re looking at through this app does require the 3G version of the iPhone.

Pocket Universe: Virtual Sky Anatomy
$2.99
Another app that lets you see the sky on your iPhone as it appears above your head is the Pocket Universe app. Not only does this augmented reality app translate the array of stars in the night sky into a star map on your phone complete with labels for what you’re seeing, you can also use the app during the evening or morning to know what’s up there that you can’t quite see. Moving the phone around to different parts of the sky updates the image in real-time, too. This one also requires an iPhone 3G to work, and there’s an iPad version as well if you want to see more of the sky on your screen.

Planisphere
$0.99
The Planisphere app is essentially a map of the sky showing all 88 constellations, more than 9000 “naked eye stars,” as well as the planets. If you’re using the GPS capability on your phone the app will show you the same sky you’re seeing, and there’s a “night light” function that gives the app a reddish tint making it easier to see the screen at night.

Star Atlas
$0.99
The map in the Star Atlas app includes more than 25,000 stars and 346 “deep sky objects” to gaze at, plus a list of more than 150 “double stars.” Choose any star or constellation from the list, or pick a star chart from the index, and then scroll around or zoom in and out to explore each map further.

Starmap
$11.99
The Starmap app is, you’ll notice, on the expensive side when it comes to apps – but if you’re really into astronomy it may well be worth the price. This map includes 350,000 visible stars; 200 main stars with names and descriptions; 150 galaxies, clusters and nebulae; and deep sky images as well. The app will tell you when throughout the night you’ll be able to see which stars and constellations, it’ll give you the lunar calendar, and animate star movement to indicate time passing. Not only that, it’ll use the iPhone 3G’s compass to show the part of the sky you’re looking at when you hold the phone up to the sky.

Moon Atlas
$5.99
Identifying constellations is cool, but don’t overlook the moon when you’re staring at the sky. The Moon Atlas app is a 3D moon globe that you can zoom in on in order to explore the goegraphy, and the app will also show you the position and phase of the moon from whatever location you choose (your current location or somewhere else). The same company that makes the Moon Atlas also makes atlases for Mars, Mercury, Venus, Jupiter, and Saturn, too.

Moon Map Pro
$2.99
The Lunar Orbiter maps in the Moon Map Pro app include images of the entire moon – the far side included – with more than 8000 geographic features named. The other moon map included in this app has about 1200 named lunar formations. Both are designed to be used with telescopes to help you identify what you’re seeing through the lens, and are still cool to play with regardless of whether you have a telescope handy.