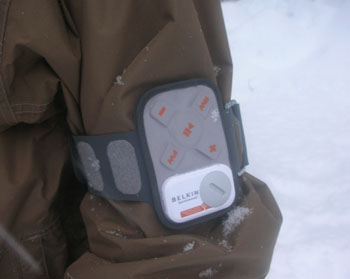 Belkin’s SportCommand rocks! I haven’t been nearly so excited about an iPod accessory since, well ever. While having a remote for your iPod is nothing new, Belkin has taken a page out of the Emeril book and “kicked it up a notch” for sure.

During the Thanksgiving weekend, we took the SportCommand out to Sunriver, Oregon at the base of Mt. Bachelor for some outdoor, on-the-job testing which it passed with flying colors. Although it looks durable, we opted to pass on the tree-impact test for obvious reasons.

Seat-of-the-pants rating: 9.5 out of 10. Highly recommended!

Long Winded Version:
What’s better than an iPod on the slopes? Being able to pause, change tracks and adjust volume on that iPod without having to take off your gloves or pull your iPod out of your pocket. Until now, that’s been a bit of a challenge.

The SportCommand straps on to your arm, leg, neck or wherever you want to strap it on to, or can be attached with a carabiner to a buckle or the like. There’s a wireless dongle that clips onto your iPod allowing you to store it in your inside pocket or backpack. 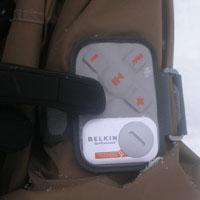 Belkin’s SportCommand is just about sheer genius. It’s made of a canvas-type material that can take the abuse of being outdoors, and isn’t uncomfortable on your arm. Adding the ability to clip it on with a carabiner to your favorite belt loop, zipper or backpack really adds tons of usability also.

The oversize buttons are perfect for winter sports, and allow you to easily control the iPod with gloves on. With the upside-down markings on the buttons, they’re of course right-side-up when you’re looking down your arm at it. See the inset picture for more detail.

iPod compatibilty is something to take in account before buying an accessory, and you’ll be pleased to know the SportCommand works with most of the iPod models out there.

If you’re looking for a gift idea for your hipster kid, yourself, or for a significant other who’s in love with their iPod and likes to spend time outdoors, this is a sure-fire way to please.

Wanna buy one? You can get it from one of these places: