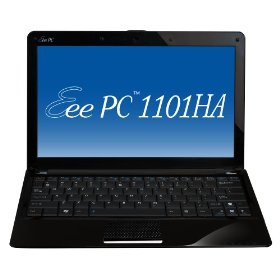 Less than two years ago, there was no such thing as a netbook. Today, these little compact computers have burst onto the scene—continuing to get faster, more powerful and easier to use, all while staying small, lightweight and highly portable.

ASUS was actually the first company to release it’s version of the netbook, the Asus Eee PC 1000—a small, lightweight, compact and low-cost laptop computer. The name “Eee” comes from it’s advertising slogan, which states: “Easy to learn, Easy to Work and Easy to play” and the newest version of the ASUS Eee netbook holds up to its slogan—integrating a more powerful processor, a bigger screen and a bigger keyboard.

While the original Asus had a teeny tiny screen, this newest model boasts an 11.6 inch, high definition widescreen LED backlight display. For those who avoided buying the previously smaller versions of the Asus will be happy that they now have a lot more screen to work with, while still being able to carry around a lightweight and thinner computer.

The Asus 1101 also features a Super Hybrid Engine, which offers a longer battery life than previous models. According to Asus, this gives you 11 hours of unplugged computing time on a single charge (though if you are planning on running multiple applications, watching a movie or doing anything that takes much processing power you will surely get less than the claimed 11 hours out of one battery charge).

The Eee 1101 series comes standard with 802.11n draft and Bluetooth wireless connectivity, allowing users to seamlessly connect to a wide range of compatible devices. In addition, it features a 1.3 Megapixel built-in webcam and digital microphone that allows you to easily communicate through audio and video.

Another bonus to a bigger screen? Not only is a lot easier to see whatever your working on or browsing on the wed, but the keyboard is also larger, rivaling those on full-sized laptops in terms of comfort and accuracy.

Another new addition to the Asus Eee 1101 is an attached multi-touch touchpad that allows users to scroll though web sites instinctively and manipulate images.

If you are looking to buy a netbook specifically because you want a tiny little computer, than this Asus Eee model is probably not for you. However, if you are looking to get a cheaper, lighter-weight laptop that’s great for the road and doesn’t have a microscopic screen, than the 1101 is a great. While Asus was behind HP and some of the other netbook manufacturers in releasing a netbook with a screen larger than 10 inches, this netbook seems to make the wait worth it. It’s still super lightweight and perfect for packing up and traveling with, while being big enough that you might actually be able to get some work done while you are waiting for that flight.