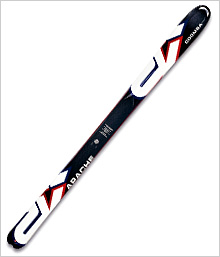 The Apache Coomba ski by K2 was designed inspired by the late, great Doug Coombs, who was a legendary extreme skier, ski mountaineer and pionerring heli ski guide, who died trying to save his friend in a steep shoot in La Grave, France. Coombs helped K2 design a ski that would work equally well for telemarking, alpine skiing, and AT skiing and part of the proceeds from the skis sold will go to a non-profit endowment focused on improving guide education and safety.

The K2 Apache Coombas were designed these ski specifically with backcountry skiing in mind. The 102 mm waist and torsion box construction makes for excellent flotation through even the deepest powder.The sidecuts also make for easy handling when tackling those super steep faces. Coombs also lent his signature ski a balanced flex pattern for predictability in breakable crust and other less-than-ideal conditions that you often encounter when skiing off piste in the backcountry.

It has the footprint of the Anti Piste without the latter’s soft-flexing tip. And that made a noticeable difference in how it grabbed a turn, making it one of the best skis tested. By one tester it was called a “fun, all-mountain ripper,” that does everything the K2 Anti Piste does, just better. It can be a touring ski, or a great inbounds ski.

However, the progressive sidecuts also make this a ski you can take from off trail back on trail—giving it enough power and maneuverability to hit the groomers and hardpack. A MOD secondary elastomeric core under the top sheet of the skis also soaks up extra vibration and chop when straight lining it out of the shoots.

The Quick & Dirty:
Where you can get ‘em:
>>Buy K2 Apache Coomba Alpine Ski

Backcounty Magazine rated this ski as one of their top picks for 2010 with good reason. This ski has not only gotten rave reviews by testers, but it has several improvements on the design of the K2 Anti Piste that make it the ideal ski to take touring the backcountry with or ski inbounds. It was designed specifically with off-piste skiing in mind, but the progressive sidecuts and other features also make this a great all-mountain ripper. Take it everywhere from a steep couloir to a groomer without any problem. These are a great ski for those extreme ski loving, backcountry junkie, powder craving skier who needs planks that he or she can take anywhere.

Looking to Buy? Here’s where you can get ‘em:
>>Buy K2 Apache Coomba Alpine Ski